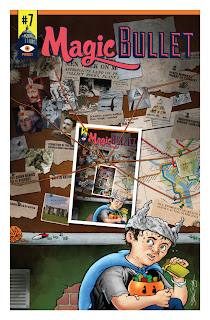 I am delighted to present to you the cover of Magic Bullet #7. Magic Bullet is Washington, D.C.’s free comics newspaper published by  D.C. Conspiracy, a comics creators’ collective in the capital region.

Steve Conley was tapped to illustrate the cover art and Matt Dembicki contributed the color center spread. Thanks to El Jefe Design for the design of our masthead, which we started using in Magic Bullet #6. This issue is Halloween themed and has a print run of 5,000. It will be hitting the streets shortly. Be sure to look for it around town and pick up this free publication.

Here are the contributors who made the final cut for print publication in Magic Bullet #7:

Thank you to all who submitted and we urge you to submit your comics to be considered in future editions.

I plan to bring several bundles to Bmore Into Comics next Saturday, August 24, 2013. We will also be distributing Magic Bullet to local establishments in DC, MD, and VA (places like book stores, restaurants, theaters, tattoo parlors, record shops, etc.).

D.C. Conspiracy members will be showcasing original Magic Bullet art at Artisphere in Arlington, VA from August 21 thru November 3 in the Works in Progress Gallery. There will be a meet and greet on September 21 from 6 PM to 8 PM where you will be able to connect with many of us in-person. Major props to Matt Dembicki and Evan Keeling for being instrumental in organizing the exhibit.

Magic Bullet contributors will be distributing the newspaper for free at many of their convention appearances in 2013. We will certainly have Magic Bullet #7 at Baltimore Comic-Con, Small Press Expo, New York Comic Con, and more!

It has been either a trick-or-treat editing this edition of Magic Bullet. I'll let you decide witch!