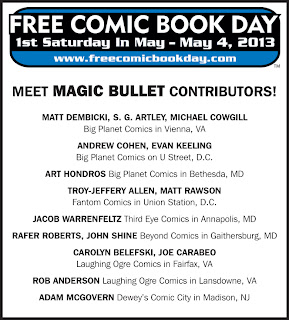 Reports from D.C. Conspiracy members about our Free Comic Book Day experiences in 2013: 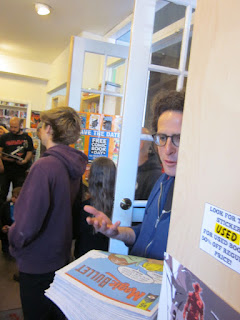 Andrew Cohen
Evan and I were at Big Planet on U Street, to hand out copies of Magic Bullet #6. We arrived a little before the 11 a.m. opening, and even then, there was a line about 10 deep waiting outside the door.  Since the store is narrow, and since we didn't want to disrupt the flow of people coming in, we stood up by the register and passed out copies of the newspaper to everyone who came to the counter. Nick and Jared were managing the store and the comics, and Eden Miller stopped by to hang out for a bit and bring refreshments. Then, when the doors did finally open, it was pretty much a flood. There was a constant stream of people coming in the door, rushing to the free racks, spreading to the rest of the store and then lining up at the cash register. Evan and I passed out about 2.5 bundles in 2 hours to everyone who left with a comic. Everyone seemed happy and excited, and there was a really good, lively vibe in the store.  It was just a fun place to be. By 1:00, we had passed out our bundles, and the initial rush had subsided, so we took the opportunity to slip out, then. I left a few copies of my mini-comic, "Howzit Funnies," in some of the empty slots on the free comic rack; bought a few comics for myself; gave our thanks to Big Planet; and bid adieu to another FCBD. 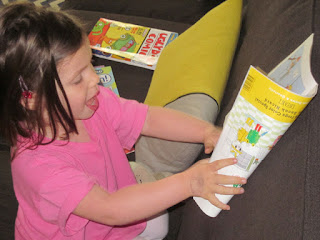 Evan Keeling
The little girl reading is my daughter enjoying some of the free comics I brought home to her. 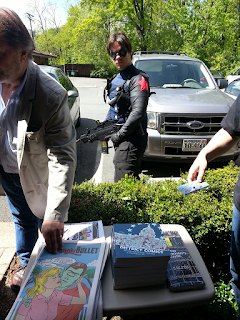 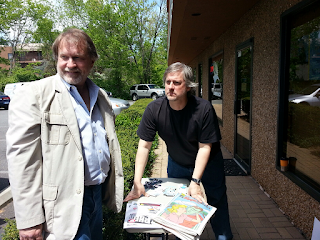 Michael Cowgill
we had a small table, and the size of the store made outside the best choice. They had a big line when we arrived and a healthy crowd for most of the two hours we were there. We handed out pretty much all the copies we had along with some bookmarks, "District Comics" zipper pulls, fliers for Steve Artley's comic, and a color version of my "Magic Bullet" page that I printed up for the event. We had a nice time chatting with each other, some of the customers, and of course the Winter Soldier (AKA Iggy -- see one of the photos). 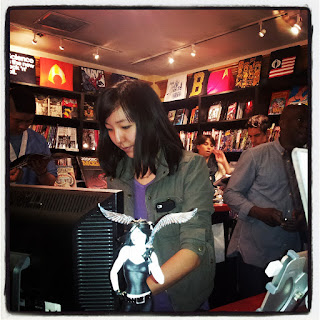 Troy-Jeffrey Allen
Super Official Statement: Hey, everyone! Matt Rawson and I attended Free Comic Book Day 2013 at Fantom Comics inside Union Station. Smiles could be seen all throughout the store. Special thanks to Fantom employee Esther Kim for coordinating the whole thing. She really went above and beyond the call of duty, putting together a cosplay contest, signings, and even paper plate masks for the kiddies. Matt and I didn't want to let Esther down, so we gave the entire shop a quick tutorial on how to make comics, taking suggestions from the customers. This resulted in Matt's wonderfully oddball "Man-eating Grasshopper" adventure. Overall, a great time. Fantom is my new favorite LCS and all the hard work DC Conspiracy has done to promote Magic Bullet #6 had clearly paid off. People knew about it and were looking for it as soon as they hit Fantom's door. 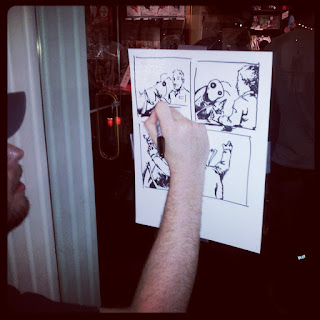 Matt Rawson
Free Comic Book Day at Fantom Comics was great! We were able to pass out many copies of Magic Bullet #6, and others said they already had it, which was equally as cool. Come afternoon, in the spirit of Free Comic Book Day, I decided to offer free sketches, which people quickly jumped on, and kept me busy for the rest of the time. So busy, in fact, that I totally forgot to take pictures of the drawings before I handed them out. It was such a fantastic time, I can't wait for next year! 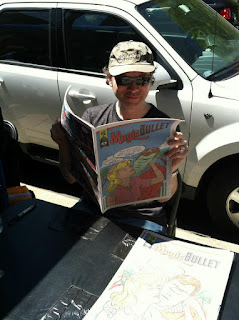 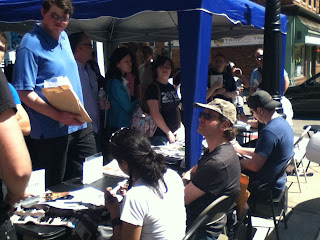 Adam McGovern
We had a great comics carnival under tents on the sunny sidewalk outside Dewey's Comic City in pedestrian-friendly, student-heavy Madison, NJ! About 50 Magic Bullet 6s were handed out, 20 pre-signed by artist Diana Leto (making us proud at the AdobeMAX conference in LA that day) and then defaced by me. Lot of interest from adventurous fanboys & girls and non-usual suspects wishing to check out the variety of voices in MB6's big comic cornucopia! The shot has been heard from greater DC to Italy to NYC's MoCCA Fest to the cement hills of Jersey!

Rob Anderson
I had a great Free Comic Book Day, talking to people, signing and selling comic books, and giving away copies of Magic Bullet #6. It's fun to be able to offer people a free newspaper packed with comics to add to their goodie bags. This was my second year signing at Laughing Ogre -- this time at the Landsdowne location -- and both years the store has been packed! I can't wait for next year... 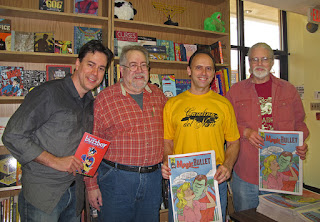 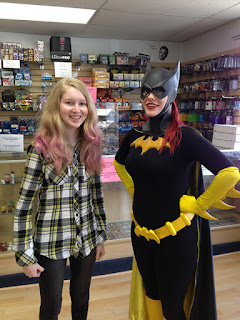 Joe Sutliff
My daughter and I didn't do any signings, but we made a few stops, including one at Victory Comics in falls Church, where Laurel had a color coordinated moment with Batgirl. 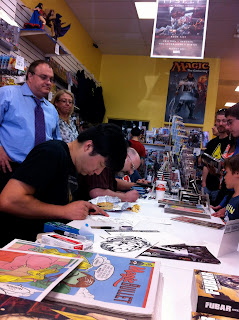 Rafer Roberts
Beyond Comics was busy and I barely had time to think. A record setting day, from what I hear. I signed a bunch of Magic Bullets and people looked happy. 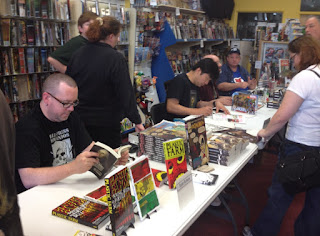 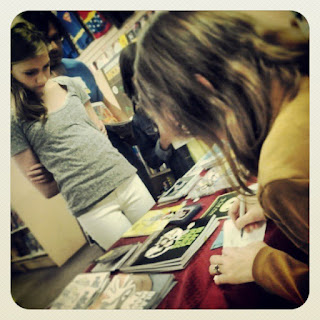 Carolyn Belefski
Free Comic Book Day is great because it marks the start of a warmer season. There's usually a comic book movie premiere that weekend (this year was Iron Man 3) and it's Kentucky Derby Day. This year was the first year I've made a FCBD appearance, but I have attended practically every year. Joe Carabeo and I were at Laughing Ogre Comics in Fairfax, VA to distribute Magic Bullet #6 for free and we also set up a table to sell our own comics. Laughing Ogre did a good job with the new layout of the free table and handling the crowds. There were a lot of cosplayers - kids and adults alike all enjoyed taking photos with the characters.We met a ton of people and stayed for 6 hours. I'll always have the memory of this girl who got very excited about my comic strip, Curls. She had the biggest smile on her face and was in a trance watching me sketch. 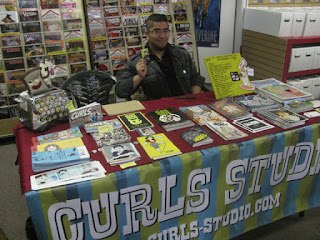 Joe Carabeo
This year's 10th anniversary of Free Comic Book Day was pretty exceptional for me. One, because every year since it's inception I've always wanted to take part in the celebration of Free Comic Book Day. And two, because Free Comic Book Day was the day that I found out about a book that would became super influential to me as a storyteller, that being the David Lapham self-published book, Stray Bullets. So for me this year to finally take part as a Free Comic Book Day guest at Laughing Ogre Comics in Fairfax, VA, and have my own stories for people discover was pretty amazing. I loved being able to tell casual people who would never go into a comic book store about our books, Black Magic Tales, Kid Roxy and The Legettes. Some never even knew making your own books was even possible -- and now they know. The turn out was smashing, very few moments of down time and the layout that Laughing Ogre Comics had for their free books and us was perfect for our exposure, they did a great job and would love to continue to cross promote with them. A huge surprise to me was we even sold a whole bunch of books, and Magic Bullet #6 was flying into new hands. So, overall, I'd say it was a great day.
Posted by Curls Studio at 5/10/2013