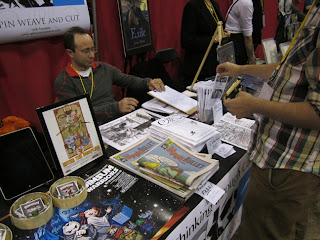 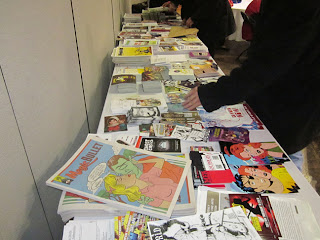 This past weekend was MoCCA Arts Fest in New York, put on by the Society of Illustrators (and also an advertiser in Magic Bullet #6). Adam McGovern had copies of the publication at his table and also at the freebies table, as Magic Bullet #6 is a free publication. Thanks to Adam for the photos above. 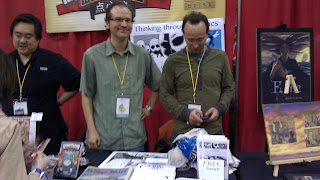 Above is a photo my friend, Nadia, was able to take of Adam, his friend Nick, and Magic Bullet #6 at his table.

In other reports, I've been hearing about Magic Bullet #6 flying off the shelves at many locations. Also received an email saying, "I can personally attest that this magazine FLEW off the table at the most recent Shoff con in Tyson's!" Be sure to click the "Locator" tab in the site navigation above to see where you can pick up a free issue. Get a hold of one before they are gone!

Don't forget: Matt Dembicki (editor of District Comics) will be spreading Magic Bullet #6 to Ohio when he exhibits at SPACE this coming weekend - April 13-14, 2013.

I will have some available at the Annapolis Book Festival at Key School this Saturday - April 13. Look for Curls Studio at ComicKey! in Artist Alley - Manse Addition in Room 2. 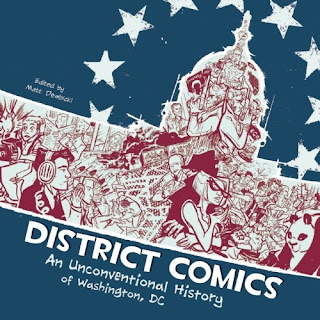 At Awesome Con, many of the Magic Bullet #6 contributors will also be on the District Comics panel in Room 102B on Saturday, April 20 at 3PM. Chronicling the unconventional history of our nation’s capital, District Comics has won numerous awards and has received critical acclaim across the U.S. Join the writers and artists who came together to honor our favorite city during this Q and A panel moderated by ComicsDC’s Mike Rhode. Panelists include: Troy-Jeffrey Allen, Rafer Roberts, Andrew Cohen, Jacob Warrenfeltz, and Carolyn Belefski

On Free Comic Book Day - Saturday, May 4 - Fifteen of our artists and writers will be at nine different locations in DC, MD, VA, and NJ to distribute Magic Bullet #6.

We look forward to seeing you all in-person soon!